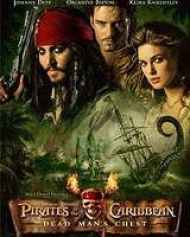 Captain Jack Sparrow is reminded he owes a debt to Davy Jones, who captains the flying Dutchman, a ghostly ship, with a crew from hell. Facing the "locker" Jack must find the heart of Davy Jones but to save himself he must get the help of quick-witted Will Turner and Elizabeth Swan.