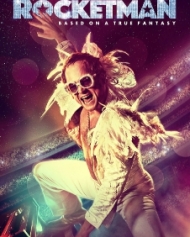 A | Biography Drama
Release Date : 31 May 2019 (India)
31 May 2019 (WorldWide)
Cast : Taron Egerton, Jamie Bell
Director : Dexter Fletcher
Synopsis
Rocketman is a biographical drama film directed by Dexter Fletcher.  This movie is the portraits the life of English singer and composer Elton John. The film title is derived from one of his song named Rocket Man. This movie distributed by Paramount Pictures had its world premiere on  16 May 2019 at Cannes Film Festival.
The film accounts the life of Elton from his early days as a prodigy at Royal Academy Music to his musical partnership with Bernie Taupin.