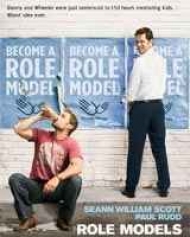 Comedy
Release Date : 2008 (India)
07 Nov 2008 (WorldWide)
Cast : Seann William Scott, Paul Rudd
Director : David Wain
Synopsis
Paul Rudd and Seann William Scott star in Role Models as Danny and Wheeler, two salesmen who trash a company truck on an energy drink-fueled bender. Upon their arrest, the court gives them a choice: do hard time or spend 150 hours with a mentorship program. After one day with the kids, however, jail doesn't look half bad. Once the center's ex-con director (Jane Lynch) gives them an ultimatum, Danny and Wheeler are forced to tailor their brand of immature wisdom to their charges, Augie (Christopher Mintz-Plasse) and Ronnie (Bobb'e J. Thompson). And if they can just make it through probation without getting thrown in jail, the world's worst role models will prove that, sometimes, it takes a village idiot to raise a child.