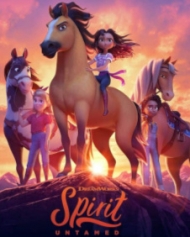 Adventure Animation
Release Date : 2021 (India)
04 Jun 2021 (WorldWide)
Cast : Isabela Merced, Marsai Martin
Director : Elaine Bogan
Synopsis
Spirit Untamed is an American computer-animated adventure film directed by Elaine Bogan and produced by DreamWorks Animation. It is based on the NetFlix animated television series Spirit Riding Free. Universal Pictures distributed the movie.
Story: Lucky Prescott was raised by her aunt Cora amid many strict rules and restrictions. They live in an East Coast City and due to some circumstances, they move back to Lucky's father, who lives in Miradero. Her life changes when she meets Spirit, a wild Mustang. she also befriends two local horseback riders. When a horse wrangler plans to capture Spirit and his herd, Lucky embarks on a brave adventure to rescue them. In meantime, she also discovers a connection to her mother's legacy.