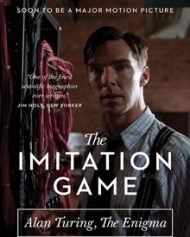 The Imitation Game is a 2014 British-American historical thriller film about British mathematician, logician, cryptanalyst and computer scientist Alan Turing, a key figure in cracking Nazi Germany's Enigma code that helped the Allies win World War II, who was later criminally prosecuted for his homosexuality.
It stars Benedict Cumberbatch as Turing and is directed by Morten Tyldum with a screenplay by Graham Moore, based on the biography Alan Turing: The Enigma by Andrew Hodges.
The film's screenplay topped the annual Black List for best unproduced Hollywood scripts in 2011. After a bidding process against five other studios, The Weinstein Company acquired the film for a record $7 million in February 2014, the highest ever amount paid for US distribution rights at the European Film Market.
The film had its world première at the 41st Telluride Film Festival, it also featured in the 2014 Toronto International Film Festival in September and will have its European première as the opening film of the BFI London Film Festival on 8 October 2014. At the Toronto festival, the film won the People's Choice Award for Best Film.
The Imitation Game will première in the United Kingdom on 14 November 2014, and will be released theatrically in the United States on 21 November 2014.