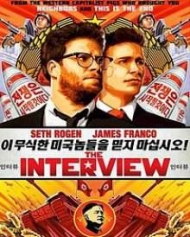 The Interview is a 2014 American political comedy film directed by Seth Rogen and Evan Goldberg in their second directorial work, following This Is the End. Dave Skylark and producer Aaron Rapoport run the celebrity tabloid show "Skylark Tonight." When they land an interview with a surprise fan, North Korean dictator Kim Jong-un, they are recruited by the CIA to turn their trip to Pyongyang into an assassination mission.
Story
Dave Skylark (James Franco), host of the talk show Skylark Tonight, interviews celebrities about personal topics. After Dave and his crew celebrate their 1,000th episode, they discover that North Korean leader Kim Jong-un (Randall Park) is a fan of Skylark Tonight, prompting the show's producer Aaron Rapoport (Seth Rogen) to arrange an interview. Aaron travels to rural China to receive instructions from Sook (Diana Bang), a North Korean official, and Dave accepts the task of interviewing Kim.
CIA agent Lacey (Lizzy Caplan) proposes that Dave and Aaron assassinate Kim to facilitate a coup d'état by use of a transdermal strip that will expose Kim to ricin via handshake; they reluctantly agree. Upon their arrival in North Korea, a military officer discovers the strip in a pack of gum and chews it. Lacey airdrops two more strips from a UAV and instructs Aaron to retrieve them and smuggle it rectally.
Dave spends the day with Kim, who persuades him that he is misunderstood, and they become friends. At dinner, the officer exposed to ricin has a seizure before death, and inadvertently shoots and kills another officer. The next morning, Dave feels guilty and discards one strip, then thwarts Aaron's attempt to poison Kim with the final strip. At another dinner, Dave discovers Kim's true character and the truth about the country, including a fake grocery store meant to deceive.
Aaron and Sook confess their attraction to each other; Sook reveals that she despises Kim and apologizes for defending the regime's propaganda. Dave, Aaron and Sook form a plan to break Kim's cult of personality. During the internationally televised interview with Kim, Dave addresses increasingly sensitive topics and challenges Kim's need for his father's approval. Kim cries and soils himself, debunking the propaganda that he is not human. Kim shoots Dave, who survives via bulletproof vest.
Dave, Aaron and Sook escape in a tank, with Kim pursuing them in a helicopter. Before Kim can issue the command to launch North Korea's nuclear missiles, Dave destroys the helicopter with the tank, killing Kim and aborting the launch. Sook guides Dave and Aaron to an escape route, and they are rescued by SEAL Team Six members disguised as North Korean troops. Dave writes a book about his experience, and North Korea becomes a democracy with Sook's help.