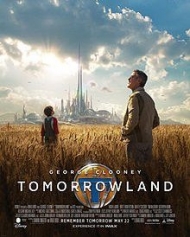 Walt Disney Pictures originally announced the film under the working title 1952 until it was retitled, giving speculation that the film is based on the futuristic themed land found at Disney theme parks. The film is scheduled to be released on May 22, 2015.

The teaser trailer for Tomorrowland was officially released on October 9, 2014. The film is scheduled to be released on May 22, 2015 in theatres and IMAX,