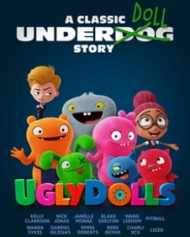 U | Animation Comedy Musical
Release Date : 03 May 2019 (India)
03 May 2019 (WorldWide)
Cast : Kelly Clarkson, Nick Jonas
Director : Kelly Asbury
Synopsis
UglyDolls is an American animated comedy film helmed by director Kelly Asbury of Shrek 2 fame. Based on Uglydoll Toys by David Horvath and Sun-min Kim, this film stars Kelly Clarkson, Nick Jonas, Janelle Monae, Pitbull, and others in prominent roles. This movie depicts the struggle of free-spirited dolls to be loved by the world.

In the hidden world, dolls are chosen for a single special kid. And dolls that are deformed are thrown into a far off land called Uglyville. In Uglyville, an optimistic doll named Moxy dreams of the Big World and getting chosen to be with a child. She, with her other friends, set on a journey to the Big world and end up at the Institute of Perfection. How Moxy fares here; will she make it to the Big World forms the rest of the plot.