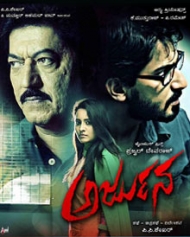 Arjuna movie is a revange crime drama film directed by PC Shekar. In which, Prajwal Devaraj, Devaraj and Bhama are playing the main lead roles.

The film's music is scored by Arjun Janya.

The movie opens up with Devaraj(Mr Verma) as a dynamic Police Officer. The movie takes a turn with a msyterious murder story of a DC(District Collector). Prajwal Devaraj (Arjuna) is introduced after 15-20 minutes of the movie, as a very innocent guy.