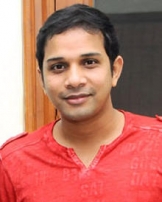 Karthik is an Indian playback singer of the Kannada and Tamil film industry.

Karthik had a good interest in music early in his life and had learnt Carnatic music during his school days. Later on he started singing for his college band and regularly participated in IIT Madras Fest ‘Sarang’.

After nearly a year since his meeting with Srinivas, Karthik received a call one night from him. Apparently, Rahman needed a fresh voice for backing vocalists for a song from Pukar and Srinivas could not get in touch with one of the singers and then he remembered Karthik and tried to get in touch with him.

Ironically, Karthik was out with his friends and was not reachable for quite some time. As luck would have it, he managed to get the information just in time and rushed to the recording studio.

Having spent over a year being a backing vocalist, Karthik got his break during the re-recording of One 2 Ka 4. For the background score of one of the scenes in the movie, A.R. Rahman wanted a high-pitched alap and Karthik along with other chorus singers gave a shot at it.

Rahman, impressed with his voice, asked him to stay back for the recording. Karthik grabbed the opportunity with both hands and performed with Rahman giving him pointers and walking through the alap. He struck gold with this session and soon Rahman asked him to perform for a song Nendhukittaen from the film Star.

When Minnale hit the screens in 2001, the tune on everyone's lips was the catchy riff of Maddy. Very few knew that the tremendously popular track was sung by a young Karthik! Nearly a thousand songs later, Karthik's career rainbow has splashed one colour after another with no sign of even sky being the limit.

Language doesn't seem to be too much of an obstacle for Karthik. Be it Telugu, Tamil, Malayalam or Hindi, chances are most of the chart-toppers are courtesy of the man with the golden voice.

Ennaku Oru Girlfriend from the Tamil movie Boys was one of his huge hits as was Oru Maalai from the 2005 film Ghajini and he sang one song for the Telugu film Kotthabangaarulokam, nijanga nenanaa...

Karthik sang at the recent Indian Premier League Twenty 20 cricket events held in Chennai. Karthik with Bennet performed at Nova 9, the ninth foundation week celebration of UST Global in Trivandrum on August 22, 2008. He married Ambika on July 12, 2006 in Tirupathi and was blessed with a girl baby.