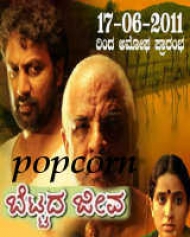 Drama
Release Date : 17 Jun 2011
Cast : Dattanna, Suchendra Prasad
Director : P.Seshadri
Synopsis
Bettada Jeeva movie based on Jnanpith award K Shivaram Karanth's novel, is a treat for the eyes and music to the ears. Story that highlights the tradition and culture of people living in remote areas of Western Ghats during pre-Independence days.


This film is about the long wait of aged parents for the return of their son Shambu who is indulged in the freedom movement in Bombay. Shivaramu escaping from British law because he is active in freedom movement losing his way reaches the house of Gopalaiah and his wife Shankari  in Kelabailu that is situated in the thick of  forest.