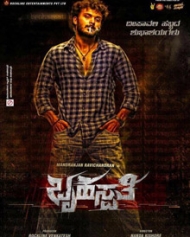 Manoranjan Ravichandran and Mishti Chakravarty are playing the main lead roles along with Sithara, Avinash, Sai Kumara, Sadhu Kokila and many others are seen in supporting roles in this movie.

Sudheer is an unemployed civil engineering graduate for four years, who choose to stay home than venturing himself into a job out of his academic domain scope. Sudheer's younger brother gets a pampered reception from his father for being a responsible son and working in an IT company, whilst Sudheer receives series of taunts for...