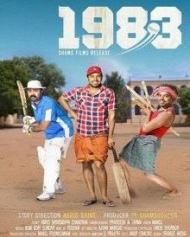 1983 is a romantic entertainer movie, which is set in a village and it is about the  love and affection of a group of people towards Cricket. After back to back hit Nivin Pauly is potraying the lead role in 1983 along with Anoop Menon and Aju Varghese.

The movie is based on the personal and professional life of a cricketer, Nikki Galrani, the younger sister of actress Sanjjanaa Galrani plays the heroine role in 1983.

1983 is directed by photographer turned director Abrid Shine and produced by Shamsudeen under the banner of Shams films. Gopi Sunder scores music for the movie. 1983 will be release on Jan 31st.