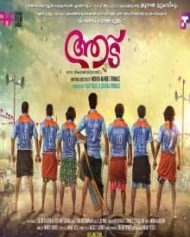 Jayasurya will be seen in a different look in Aadu Oru Bheegara Jeevi Aanu with huge moustache and trimmed hair. He play the role of Shaji Pappan who is a member of sports club naming ‘Winners Pothenmukku”, Movie story is based on Tug-of-War competition.

For the first time in malayalam cinema heroine role will be played by a Goat.