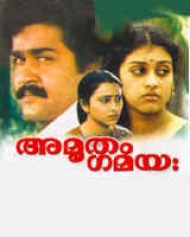 Drama
Release Date : 1987
Cast : Mohanlal, Parvathy Jayaram
Director : T Hariharan
Synopsis
Amritamgamaya is about Doctor Ram Das(Mohanlal) who works in a small village clinic, which is run by his sister's father-in-law(and his to be father-in-law). During his visit to a poor Brahmin's aged wife he realizes that their son was murdered in the Medical college hostel during a ragging session lead by him. That feeling haunts him and as a repentance he decides to take care of that poor family . And just for that reason he started loosing everything one by one.