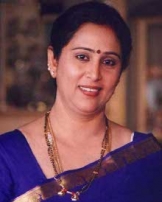 Geetha is an Indian actress who has performed in Tamil, Telugu, Hindi and Kannada language films. She debuted in the Tamil language film Bhairavi as Rajinikant’s sister. Since then she has acted in films of all the South Indian languages, and in a few Hindi films.

Geetha studied in Bangalore up to grade 7, at Raghavendra High School, Malleshwaram, Bangalore. Her father worked for a multinational company and they moved to Chennai, where Geetha completed her high school at T Nagar Girls’ High School.

Malayalam cinema which gave her a break, utilized Geetha as a character actress and she decided to stay in the Malayalam film industry due to her love for the meaningful roles. Director K. Balachander was her mentor and in Malayalam movies, she put in some superb performances notably the one in Panchagni, opposite Mohanlal, which was based on the true life story of a Naxalite revolutionary Ajita, for which she also was nominated that year for the national award, for the best actress category.

The role in Panchagni was the turning point for Geetha, which gave her a lot of accolades and acclamations from both the critics as well as the common cinema-goers and made her a popular star in Malayalam. Some of her other notable films include Vatsalyam, Sughamo Devi, Oru Vadakkan Veeragadha, Aadharam, Aavanazhi, and several other films.

She is widely accepted by Malayalis and remains one of their favourite actresses of all time. She was also very famous in Kannada movies.

In 1997, she married Vasan, a chartered accountant, whose family had seen her on television. The couple moved to New York, where Vasan works as the CFO of an Internet company.