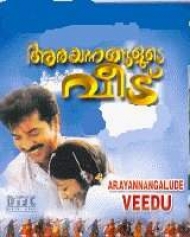 U | Drama
Release Date : Apr 2000
Cast : Mammootty, Lakshmi Gopalaswamy
Director : Lohithadas
Synopsis
Arayannangalude Veedu movie begins in Bhilai where Ravi (Mammootty) tells his daughters that he will show them swans, once they are back at his native place, a place where people know only to love.

Ravi who returns to his tharavaadu after a long time, where he was labelled as a Mudiyanaaya Puthran.But his dream and real facts stood very much apart.His elder brother (Devan) and almost all his siblings tries to gang up against him, making the place which he called home, nothing short of hell.

But he is determined to bring back the olden days.He could do justice to that to an extent. But in the end he decided to return to Bhilai , but this time taking his mother along. The movie ends he could show the arayannagal to his kids at his home itself.