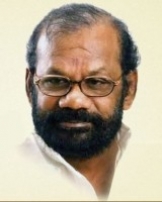 M. Raveendran (also known as "Raveendran master") was a popular Malayalam and South Indian music composer. He was always referred to as the aristocratic music director of Malayalam who had a distinctive style of his own.

He composed more than 150 films primarily for the Malayalam and Tamil film industries. He also composed a few albums including Vasantha Geethangal. He died in Chennai following a cardiac arrest. He was also suffering from cancer.

Early life
Born in Kulathupuzha in Kollam in 1943, Raveendran joined The Swathy Thirunnal Sangeetha College, Thiruvananthapuram after completing his formal schooling. He learned music along with noted singer K.J. Yesudas. Poverty in the family did not present him any ‘colourful’ days in his childhood. But he took those ‘dismal days’ positively and as a stepping stone for the 'hard' days ahead in his career as a singer and musician.

Kulathoopuzha Ravi (before changing his name to Raveendran) earlier had tested his vocal cords for 30 odd songs under various noted music directors including Baburaj. But he could not go on with the singer tag for long. Lack of opportunities in the field made him a dubbing artist and a singer in an orchestra troop. Then he turned to scoring music.

He has composed many soulful melodies. He started his career as a playback singer in the 1970s and evolved as one of the foremost music directors in South India, composing about 1,500 songs in 450 films, in addition to a number of light music and devotional albums.

Musical career
The famous playback signer K. J. Yesudas, a former classmate, altered the course of Raveendran's life by persuading him to compose songs and thus he become a music director.

Director J.Sasikumar, commissioned Raveendran to score the music for "Choola"(1979). The song "Tharake Mizhiyithalil Kannerumayi…"], sung by Yesudas, became a superhit. Ever since that time, Raveendran ruled the roost of Malayalam film music with several super-hit songs.

Melody incorporated with the aspects of Carnatic music were the hallmark of his songs. By the release of Thenum Vayambum (1981), Raveendran made his mark in the film field. The songs, "Thenum Vayambum…", "Ottakambi naadham…" are still highly sought-after songs for Malayalees.

A few among Raveendran’s best songs were in films like ‘Thenum Vayambum’, ‘Amaram’, ‘His Highness Abdullah’, ‘Ayal Kathaezhuthuthukayanu’, ‘Nandanam’ 'Rajashilpi', 'Bharatham', 'Aaramthampuran'. Especially the song 'pramadavanam veendum' of the movie 'His Highness Abdullah' was one of the most adored songs of that time.He shared a close relationship with famous actor Mohanlal.

A recipient of a National Award for Bharatham, he had also received several state awards.