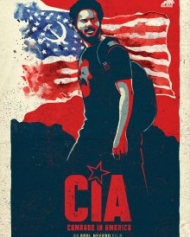 The movie is all about Aji Mathew and his intense love with a girl whom he meets at his hometown. Dulquer Salmaan essays the central character, Aji John, while debutante Karthika Muralidharan essays the role of his lady love.

The music for CIA is composed by Gopi Sundar. Overall, the movie has 3 songs.

Comrade In America, which was widely shot at the various location of Pala and the USA.