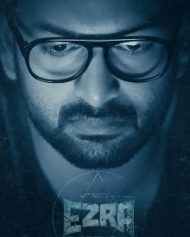 Ezra is all about an old bungalow, which is haunted by the spirit of Abraham Ezra, a Jewish man who lived in the pre-independence era. Prithviraj appears as the new owner of the bungalow, Ranjan Mathew. Later, he discovers strange occurrences within his home, how gets rid of the spirit forms the plot of the movie.

Highly promising trailer of Ezra which got released on 14th December 2016 hints that movie will have a different making style, which is very new to Mollywood. Upon release trailer is creating waves in all...