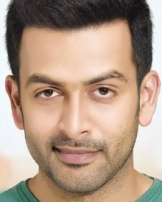 Prithviraj Sukumaran is a South Indian film actor. He made his debut in 2002 with the critically acclaimed Malayalam film Nandanam, and has since then established himself in the Malayalam cinema through a variety of roles such as roles in Stop Violence, Chocolate, Vaasthavam and Classmates. He has also made strides in Tamil cinema with hits like Kana Kandaen, Parijatham and Mozhi.

Prithviraj was born in Trivandrum, Kerala, to popular Malayalam film actors Sukumaran and Mallika. His elder brother Indrajith Sukumaran and sister-in-law Poornima are also film actors. His initial schooling was at St. Mary's School, Poojappura, which was near to his Chengallur home. Here, he acted in various dramas and skits for the annual-day celebrations. In one of the annuals, seeing his performance Sukumaran, his father had reportedly commented to his mother that he was meant for acting.

He represented Bharathiya Vidya Bhavan at the competition. He remains the only person to win the personality contest "LA-Persona" twice in the history of the competition (in 1998 & 1999) which started in 1996.

He was still pursuing his Bachelor's in Information Technology at the University of Tasmania, Australia, when he was selected by Renjith to play the lead role in his directorial debut film Nandanam. It was Fazil, a leading Malayalam film director, who introduced him to Renjith.

Following a decent performance in Nandanam, he was flooded with several offers from the industry, so he decided to take a break from his studies and concentrate on acting. Prithviraj married BBC reporter Supriya Menon on 25th April, 2011, at a resort near Palakkad.

Prithviraj began his career in Malayalam cinema in 2002. He was soon invited to act in Tamil films. He eventually became highly successful in both Malayalam and Tamil within a very short span of time. Based on his performances, national Newspaper The Hindu has written that " whether his latest films 'Chocolate,’ ‘Satham Podathey’ and ‘Kannamoochi Yenada’ flop or succeed, Prithiviraj is one of the young stars who will still be in the reckoning."

Prithviraj was introduced to cinema by Renjith who cast him in his directorial debut film Nandanam. After this, he was flooded with offers and was able to appear in films directed by the leading figures of Malayalam film industry such as Lohithadas, Vinayan, Kamal and Bhadran.

He was noted for his performances in Stop Violence and Swapnakoodu, films that did well at the box office. Shyamaprasad, who cast him in the lead role in his much-acclaimed film Akale, comments that Prithviraj's advantages are his talent and intelligence irrespective of his box office successes.

He was critically acclaimed for the portrayal of Sub Inspector Solomon Joseph in Vargam. In this film, his character had to go through a wide range of emotions. In the first half of the film, he was the corrupt and malicious Inspector, and in the second half he became a victim to his arrogance and repents and tries to turn a new leaf.

In 2006, Lal Jose's Classmates was released and it turned out to be one of the biggest blockbusters in Malayalam cinema. The film had an ensemble cast consisting of Jayasurya, Narain, Indrajith and Kavya Madhavan. After Vargam, Prithviraj acted in another film called Vaasthavam with the same director, M. Padmakumar.

It was a hard-hitting drama, in which Prithviraj again got noticed for his intense acting. The role fetched him the Kerala State Award for Best Actor for 2006, and in the process Prithviraj became the youngest actor to win the award.

In 2007, his film Chocolate directed by Shafi received glowing reviews. His performance in the film has been praised as contributing to the success of the film. In Thalappavu directed by Madhupal and Thirakkatha directed by Renjith, he took up roles which serve as pivotal characters.

One of the reviews of Thalappavu describes it as a film which is truly the coming-of-age film for Prithviraj the actor and that there is a spartan dignity that he brings into his commanding portrayal of Naxalite Joseph. Thirakkatha has also received widespread praises from the reviewers. One of the early reviews describes it as a "genuine attempt that keeps the viewer engaged until the end".

His latest release is Lollypop directed by Shafi. He has also made a special appearance in Anjali Menon's widely acclaimed film Manjadikkuru. His upcoming Malayalam projects include Rithu and Calendar. He is also being cast in the lead role for the film titled Punyam Aham produced and directed by Raj Nair, Thakazhi's grandson.

In the mean time, he made his Tamil debut as the villain in Kana Kandaen in 2005. His performance as the handsome and suave villain grabbed quick attention and was praised for his unconventional portrayal of the character. Soon, he got an opportunity to act under the direction of Bhagyaraj in the film Parijatham.

Bhagyaraj has said in an interview that he became keen on involving Prithviraj in his project essentially influenced by the Media acclaim the actor received in Tamil Nadu following his amazing performance in Kana Kandaen. "The entire media unanimously appreciated him in Kana Kanden. So it was with that confidence that I signed him".

His performance in Parijatham also received similar attention and appreciation in Kollywood. One of his recent Tamil flicks was Mozhi in which his splendid performance was highly praised. The film ran in packed houses for several weeks/months. His other Tamil films are Satham Podathey and Kannamoochi Yenada.

The success of the films and his own intense performance in them have helped him to enhance his stardom in the Tamil tinsel world. The subtle performance of Prithviraj in Kannamoochi Yenada has received a special mention by many reviewers.

Vellithirai, the Tamil remake of Udayananu Tharam, a Malayalam box-office success is his latest release in Tamil. Most reviews unequivocally praise Prithviraj's performance in the film. He is described as “flawless" in his role as an aspiring director. “His character demands underplaying and he exactly does he same. He is able to express the anger and agony of being cheated with aplomb. The way he reacts to the betrayal stands out”.

Yet another review echoes the same feeling: “Prithviraj ... makes the best of his assets -- his expressive eyes, which glint in fury, soften with love, or brim over with frustrated tears”.

Many Telugu producers and directors have been attempting to cast Prithviraj in their films. First there was news about Kalakanidhi directed by Bhushan Kalyan produced by Ravi and Mahesh Kumar under the banner of Swan Creations. Late Raghuvaran and Anjala Zhaveri were co-staring with Prithvi in this film.

Originally planned to be completed in 2007, the project was delayed. Then there was a news of Police Police (a Tamil and Telugu bilingual film) directed by Manmohan, a debutante, and produced by Chandu Prithviraj, along with Srikanth (who co-starred in Kana Kandaen) who was apparently to be cast in the role of a police officer. Prithviraj is reported to be well known in Telugu through the Telugu dubbing of the Malayalam film Ananthabadram as Sivapuram.