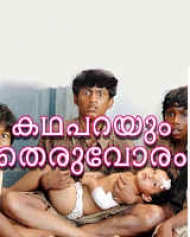 Drama
Release Date : 31 Jul 2009
Cast : Kalabhavan Mani, Padmapriya
Director : Sunil
Synopsis
Kadha Parayum Theruvoram movie tells the story of  four children who were  brought up in the street. They were under the custody of a street gang. One day they escaped from the mafia who made them beg along the streets.

They reached in a town and planned to lead normal life by doing job. But it was not an easy task since people were not ready to give them job as they were children. The boys started collecting scrap materials and sold to survive.

Once  they were wandering along the street they heard a cry of a child. It was from the bag of a man.