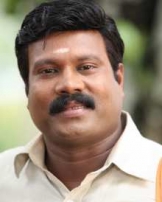 Kalabhavan Mani was an Indian film actor (Malayalam) born on 1 January, 1971. Mani was born in Chalakudy, Kerala. He started his career as a mimicry artist in Kalabhavan, Kochi.

He started his acting career in the Malayalam film Aksharam as an auto driver. Since then, he acted in several movies as a comedian. He proved his acting prowess in movies like "Vasanthiyum Laksmiyum Pinne Njanum", in which he played a blind street singer. He has acted in more than 80 films in Malayalam and more than 20 films in Tamil. At first, he was a comedian and then he turned out to be a serious actor as well as a strong villain. His another remarkable serious role was in the film My Dear Karady.

He was also a professional playback singer and a singer of Nadan Paattu (folk songs). His first album was Kannimanga Prayathil. He had since then established a parallel industry of 'Nadan Pattukal', selling a record number of releases. He also released a few religious songs and Mappila Pattukal, which however did not make an expected impact in the market.

Eventually he became popular all across South India portraying negative characters in an unusual style. Despite all the popularity, Mani was known for his down-to-earth personality and for providing various humanitarian aids to people in need. People in Chalkudi are very much fond of him.

Kalabhavan Mani, who was suffering from liver disease, was admitted at a hospital in Kochi, and he passed away on Sunday (March 6, 2016). He was 45.