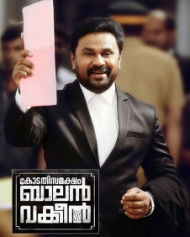 Drama
Release Date : 21 Feb 2019
Cast : Dileep, Mamta Mohandas
Director : B Unnikrishnan
Synopsis
Kodathi Samaksham Balan Vakeel is a Malayalam comedy-drama movie, directed by B Unnikrishnan. The movie stars Dileep, Priya Anand, Mamta Mohandas in lead roles. As per the reports, Dileep would be seen playing the role of a lawyer in Kodathi Samaksham Balan Vakeel. The core plot of the movie revolves around Balan Vakeel, who is a lawyer dealing with just petty cases. He has a stammering problem, which many consider as his weakness. There comes a situation when he has to arrange a lot of money and he comes across a demand of sending a legal notice to a person, which leads him to big trouble.