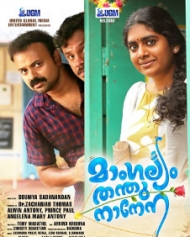 Comedy Drama
Release Date : 20 Sep 2018
Cast : Kunchacko Boban, Nimisha Sajayan
Director : Soumya Sadanandan
Synopsis
Mangalyam Thanthunanena is a Malayalam comedy movie, directed by Soumya Sadanandan. The movie stars  Kunchacko Boban and Nimisha Sajayan in lead roles. The plot of Mangalyam Thanthunanena revolves around Roy and Clara. Roy, who was working in the Middle-East comes to his native place for his marriage with Clara. But later, he gets to know he has lost his job. Much like any couple, Roy and Clara's married life moves ahead with happiness as well as silly fights. Then comes in the financial woes that put Roy in a state of trouble. What happens rest has been narrated in Mangalyam Thanthunanena.