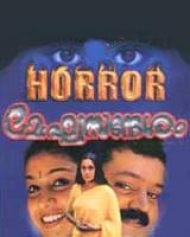 Horror
Release Date : Apr 2001
Cast : Suresh Gopi, Samyuktha Varma
Director : Rajasenan
Synopsis
Meghasandesam movie is all about Rosy Samuel (Rajsri Nair) who is a girl, who is madly in love with Balagopal (Suresh Gopi)during her college days but could not tell it to him. When her marriage is fixed she rebels and her parents allow her to marry Balagopal. On her way to tell Balu, she meets with an accident. She is a ghost now and when she meets Suresh she tells about her past. Suresh finds this an interesting plot and allows Rosy to stay with him in his estate bungalow.

Trouble starts when Rosy gets jealous of Balu's fiancee Anjali (Samayuktha Varma) and wants to kill her and also Balu (so that both the spirits can live together in heaven). Balu takes Fr. Rosario(Napoleon) help and then starts a series of comic incidents which result finally Rosy being rid off.