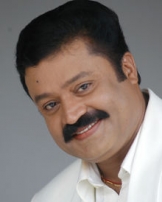 Suresh Gopi is a National Film Award-winning actor in Malayalam cinema who is famous for his roles in police dramas. He is one of the reigning superstars in Malayalam cinema. He is noted for his leading roles as much as he is for the character roles. He is also famous for his philanthropic efforts. He is a supporter of the Indian National Congress.

He did his schooling at Infant Jesus High School in Kollam and got graduated from Fathima Mata National College in Kollam.

His most notable works of this period include 'Irupatham Noottandu' (Twentieth Century), Rajavinte Makan ('The son of the King'), which are Superstar Mohanlal starrers, and Oru Vadakkan Veeragatha, which was a Mammootty starrer.

His major break in a leading role came with "Thalasthanam" (The Capital) followed by Ekalavyan and Commissioner all of them being Police dramas. He shot to super stardom with these movies and followed it up with roles in 'Pathram' (newspaper), 'Lelam' (Auction) and 'Vazhunnor' (The Rulers). His portrayal of the police commissioner 'Bharath Chandran IPS' in Commissioner (1994) shot him to stardom and is etched in Malayalam movie history as one of the most recognized roles.

His famous monologue "Ormayundo ee mugkham?" ("Do you remember this face?") is synonymous with the role and has been subject to much imitation and parody. With the movie, he was established as the third superstar of Malayalam film industry after Mammootty and Mohanlal, which he keeps till date. Also, his association with Shaji Kailas and Ranji Panikkar was much acclaimed.

He is famous for his fervent delivery of English dialogues in the movies that he acts in.
He is an English graduate, which enables him do it with great ease.

He became noted and was glorified for playing larger-than-life roles that were anti-establishment and often were a dig at political and social corruption. In 1997, his acting prowess was proved as "Kannan Perumalayan" a role that he played in "Kaliyattam" (The play), a screen adaptation of Othello by William Shakespeare, got him the National Award for best actor in the same year.

After 2000, when his films were doing fairly good at the box office, he decided against acting in movies including violence. It was rumoured that he was giving up acting career and pursuing a political career. But he acted in off-beat movies and accepted only soft roles in the period 2001-05. In 2005, realizing his mistake, he decided to make a comeback in action movies.

Ranji Panikkar, script writer of his most successful movie Commissioner directed the sequel Bharath Chandran IPS, portraying him as the angry police commissioner. The movie was a super hit and was followed by a number of movies in which he played the typical police officer and detective.

While some of them like Tiger, Chinthamani Kolakkase and Naadiya Kollappetta Rathri all were directed by Shaji Kailas and were successful, a number of them like Time, Detective, Aayudham, Thavalam, Rashtram, Pathaka, Bullet and Smart City were flops. He performed well in a very different role in Lanka, which went unnoticed among the crowd of movies.

Before coming to the cinema field, he was in the English literature field and his favourite authors include Bernard Shaw, Shakespeare, Camilla way, etc. He is famous for his philanthropic efforts. He has done many charity activities in Kerala, Tamil Nadu, etc.

Once he gave up the chance of standing for the election with Congress Party. His charity activities are spearheaded by his fans club which has a strength of about 800 members. He frequently visits Sree Chitra poor home, Trivandrum, and spends time with the inmates.