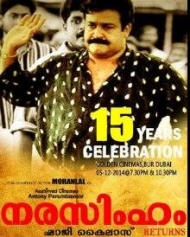 Narasimham will be screened at Gold Cinemas, Dubai on December 5th 2014. Makers decided to re-release Narasimham to celebrate the 15th year of grand success.

Narashimham movie is all about Induchoodan Menon (Mohan Lal) who pitted against his father Justice Menon (Tilakan). When Induchoodan the first rank-holder in the IAS Exams, is wrongly implicated in a murder case, his father Menon, the local judge, refuses to help him.

When the movie starts, six years has passed, Induchoodan is released and Madhavan Nambiar (Narayanan Nair) is dead. Induchoodan now into social activities with his friends.Meanwhile Justice Menon and wife comes back to live with Induchoodan. In the mean time Induchoodan meets Anuradha (Aishwarya) daughter of Mooppil Nair and they fell in love with each other.

Then it is revealed that Justice Menon had a secret affair with another woman and has a daughter  Indulekha (Kanaka). As a girl staying alone with little income, she goes to her father asking for identity and protection but was denied by the proud Menon. Induchoodan knows all the truth from his uncle ((Jagathi Sreekumar) and assumes the protection of his sister.

Induchoodan asks his father of the truth and Menon denies to admit it. Frustrated Menon addicts to drinks and finally decide to admit the truth. He visits his daughter one evening and accepts her as daughter. Before anybody else knew it, the girl is Murdered and Menon is accused of the murder and is arrested.

Induchoodan trusts his father and brings his old acquaintance, a prolific lawyer Nandagopala Maarar(Mammootty). Maaraar uses his skills to destroy the crime plot and Menon is judged innocent.