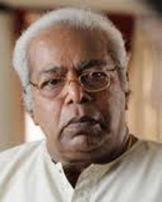 Thilakan is an Indian film actor, who mainly works in Malayalam cinema and Theatre. His original name is Surendranatha Thilakan. He started his career as a theatre artist and ventured into full-time acting in theatre, after leaving intermediate college mid-way in the year 1956. He and a few friends formed a drama troupe called the Mundakayam Nataka Samithy, in which he excelled his capabilities as an actor.

Thilakan became a well-known name after his entry into Malayalam cinema. He started his career in cinema with a minor role in the film Ulkadal in 1979. His first role as a lead character was as Kallu Varkey, in 1981. Thilakan established himself as an actor after he got his first State Award in 1981 for his role in Yavanika.

Thilakan fell ill at the beginning of 2000s and was hospitalized for a long time. After recovering he slowly returned to acting. In his comeback, he played some character roles with Mammootty, but later accused him of giving him less significant roles. In 2007, he acted in Ekantham, for which he received a special mention from the jury. Even the film technicians’ guild, MACTA, made an exception and honoured him, though he is not a technician.