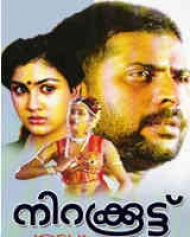 Action Drama
Release Date : 12 Sep 1985
Cast : Mammootty, Sumalatha
Director : Joshiy
Synopsis
Nirakkoottu movie tells Sasikala Varghese (Urvashi) who wants to find out about Ravi Varma (Mammootty) who is sentenced to death for the murder of his wife Mercy (Sumalatha) who is also Sasikala's sister. Journalist Sasikala covers and receives acclaim for the story of the once-wealthy but now death-sentenced convict Ravi Varma, for the cruel murder of his ex-wife Mercy, a beautiful model. A day before his scheduled execution, Ravi Varma escapes prison, and a deeper story that ties him, Sasikala and other characters unfolds in the events that follow.