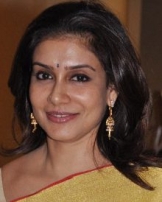 Lizy (ml: ലിസ്സി, also spelled in English as Lissy or Lizzie or Lizzy, and Lakshmi  after marriage), is a South Indian film actress. She is a Malayalam actress who also acted in Telugu and Tamil  movies.

Early life and family
Her family is from Pukkattupady, a place in Ernakulam district at Aluva-Thripunitura and Ernakulam-Perumbavoor bus root intersection. Her father died at her younger age. She was brought up by her mother Aliyamma (ഏലിയാമ, Malayalam of Elizabeth) as a Roman Catholic. She married Malayalam film director Priyadarshan. She has two children, daughter Kalyani and son Sidharth.

Career
Lizy started her film career in early 1980s and ended in early 1990s. She met her husband, Priyadarshan, on the set of his second film. They have done 12 movies together, though she has since quit acting.