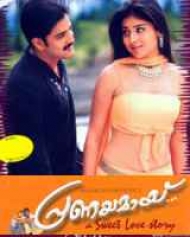 Romance
Release Date : 2003
Cast : Tarun, Shriya Saran
Director : B.V.Ramana
Synopsis
Pranayamai is the dubbed version of Telugu movie Ela Cheppanu. Shekar (Tarun) accidentally kills a young businessman (Shiva Balaji) who returns India from Germany. But his friend Suneel takes him out of the accident place and never lets him to tell the truth to the police. He then along with his friend lands in Germany and confesses his act to Shiva Balaji's paralyzed father.

Priya (Shriya) who is a Shiva Balaji's fiancée, heads now his struggling company, Verma Industries. Shekar voluntarily joins the company and rebuilds the company. And priya falls in love with him.

In between arrives Abhiram, a man with a million rupees and a million-dollar heart who bails out Priya from financial quagmire. Who does Priya accept?