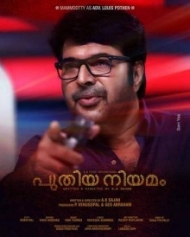 The film was initially titled Solomante Koodaram but later changed to Puthiya Niyamam. The title of the film was revealed through its first look poster on 27th October 2015. A 54 sec teaser released on 29th Jan 2016 which hints that movie will be a thriller flick.

Puthiya Niyamam censored with U/A certificate with a total running time of 133 mints. Movie all set to hit...