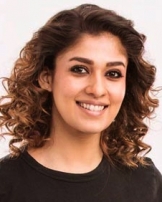 Nayanthara, aka Lady Superstar, is a South Indian actress who has acted in many Malayalam, Tamil, and Telugu movies. After several commercial successes such as Chandramukhi, Ghajini, Billa, and Yaaradi Nee Mohini, Nayanthara has established herself as one of the most promising and sought-after actresses in South India.

Nayanthara was born on November 18, 1984 into an Orthodox Syrian Christian family in Tiruvalla, Kerala. She did her schooling in both Kerala and Tamil Nadu, as her father was an Air Force official. She joined Balikamadom High School in Thiruvalla for +2, then joined Marthoma College in Thiruvalla for her Bachelor's degree in English Literature. Diana Mariam Kurien is her legal name at birth. At Chennai's Arya Samaj Temple, Nayan accepted Hinduism.

She co-starred alongside Mohanlal in Naatturajaavu and in Fazil's Vismayathumbathu. She was also cast with Mammootty in Thaskaraveeran (dubbed into Tamil as Yuvaraj) and Raapakal. She has also starred in several Tamil and Telugu movies. She was cast opposite Sarath Kumar in Ayya and with Rajinikanth in Chandramukhi. Her later films, such as Vallavan (Tamil), Gajini (Tamil), Yogi (Telugu), etc., all flopped except Ghajini and Vallavan. She regained her throne in Kollywood through Billa in 2007. Her next movie, Yaaradi Nee Mohini, was a stupendous success.

However, after her break-up with Prabhu Deva, she made a comeback; she began shooting for Krish's Krishnam Vande Jagadgurum with Rana Daggubati in March 2012, after an 11-month sabbatical. She portrayed the role of a journalist in this movie, and her performance was also praised, with a reviewer from Sify citing that "Nayanthara does not play the normal commercial glam-doll for a change, and she is good."

As a reporter, she looked good, and her chemistry with Rana was perfect. Greeku Veerudu, her first release in 2013, co-starred Akkineni Nagarjuna. Her performance was also praised, with a reviewer from Sify citing that "Nayanthara looks beautiful in trendy costumes as well as in designer sarees." Her chemistry with Nagarjuna is equally nice and perfect.

While shooting for her Tamil film Vallavan, she was romantically linked with the film's director and co-actor, Silambarasan Rajendar. She initially denied the reports. In November 2006, however, she confirmed that she and Silambarasan had broken up, going on to add that she would not work with him again. During the making, in 2008, and after the release of her film Villu, reports suggested that she was in a relationship with its director, Prabhu Deva, with some sources even claiming that both had secretly married in June 2009.

She had tattooed his name on her wrist and began appearing with him in public while keeping silent and refusing to comment about the issue, neither denying nor confirming the relationship. In September 2010, Prabhu Deva openly confessed his love for Nayantara and further stated that he would marry her soon. In 2012, Nayantara confirmed that she had ended her relationship with Prabhu Deva.

Nayanthara and Vignesh Shivan have been in a relationship ever since they worked together on Naanum Rowdy Dhaan in 2015 and are engaged. The couple got married on June 9, 2022, in Mahabalipuram. On October 20, 2022, the couple announced the birth of their twin children by sharing the kids' photos online.