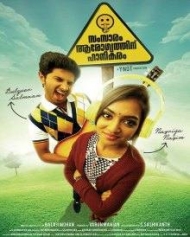 The film started rolling from November 2013. It is being simultaneously made in tamil with the same lead actors, under the title of Vaayai Moodi Pesavum.

Samsaram Arogyathinu Hanikaram soundtrack was composed by Sean Roldan, whereas lyrics were penned by Anu Elizabeth Jose. Production & Distribution of the movie is by Playhouse Release.