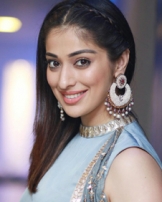 Raai Laxmi aka Lakshmi Raai is an Indian film actress and model. She made her acting debut in 2005 in the Tamil film Karka Kasadara. Subsequently, she appeared in a number of Tamil films, including the comedy film Kundakka Mandakka (2005) opposite R. Parthiban, Perarasu's action-masala flick Dharmapuri (2006), and the romantic flick Nenjai Thodu (2007).

In 2008, she began working in more serious films such as the drama film Velli Thirai, in which she played herself, and the action-thriller Dhaam Dhoom directed by Jeeva.

She received positive feedbacks for her portrayal of a lawyer in the latter. A review from Behindwoods wrote: "The latter (Raai Lakshmi) sizzles even as she is supposed to play the court professional who is caught in the web of smuggling drugs". She won her first Filmfare Award nomination in the Best Supporting Actress category.

In Vaamanan, she played a glamorous supermodel. In 2010, she was seen in three films. She made special appearances during song sequences in two of them, In Ghost House Inn and Pen Singam, and portrayed a cowgirl in the Tamil film Irumbukkottai Murattu Singam.

Raai At The Celebrity Cricket League 2012

Raai Lakshmi's first 2011 release was Christian Brothers, which was a huge commercial success. Her next two films were Tamil projects, the comedy-horror Kanchana and the Venkat Prabhu-directed action-thriller Mankatha, starring Ajith Kumar. She played a negative character in the latter, which was received positively by critics. Both films emerged high financial successes. Following Kanchana's success, she was signed on to reprise the role in its Kannada remake too.

Her release Arabiyum, Ottakavum, P. Madhavan's Nairum opposite Mohanlal was met with mixed reviews but turned out to be a commercial success. In 2014, her films that released were Aranmanai and Irumbu Kuthirai in Tamil, Rajadhi Raja in Malayalam and Shrungara in Kannada.