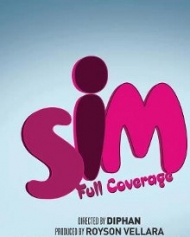 Drama
Release Date : 19 Apr 2013
Cast : Ann Augustine, Anoop Chandran
Director : Diphan
Synopsis
Sim tells the story of Seetaramaiyer. He is working in the RT office. He clings strongly to the rules and traditions of the 80s.Iyer still remains a chronic bachelor as he cannot find a suitable bride whose horoscope suits that of his own. Now his co-workers tries to get him married somehow.

His friends gave a matrimonial ad in the newspaper and forced him to buy a mobile for the same purpose. But all the calls he received where to know the whereabouts of Karthik who used the SIM that Iyer now uses.

A call that comes to the mobile completely changes Iyer's life. The interesting story that follows is picturized by Deepan in his movie 'SIM'.