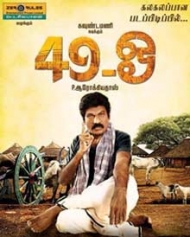 49-O is a Tamil comedy drama film directed by debutante P. Arokiyadoss, who previously worked as an assistant to Gautham Vasudev Menon. The film will star Goundamani in the lead role.
Story Line
The story is about the village people were completly depends on agricultural land. The Government decides to bring railway station next to the agricultural land. Knowing in advance the particular area's MLA son plans to to buy the lands for for lower price and decides to sell it as flats for huge prices.
He pays a small amount as an advance to the farmers and received the whole power of their lands, balance amount he kept holding with him. Later farmers were cheated by him. What happens next? Is said in the rest of the story to be watched on big screen.
Director's Press Statement on 49 O
‘I ail from  a rural back round and i grew in an atmosphere where i found the survival of a farmer who gives all he has got is always on the border line.He is either  weaker or the weakest in the social and economical link. Is it the economy that is blocking the growth of agriculture, or is it the society that is turning blind to the hand that feeds,or is it the political system that drags the oldest and holiest profession into dire straits has been my question.
I had chosen to look at this issue and used humour as the form of attack too. In my opinion Sarcastic humor and a sharp tongue is good enough and stronger than a mighty army.
In 49 O the wit is the weapon and Goundamani sir is the crusader. The experience of working with such a legend is unforgettable. Not many know his social consciousness is much bigger than his screen image of being a comedy actor. I thank my producer Dr Siva Balan for coming forward to produce this film that is laced with message and entertainment. 49O is releasing on 17th and iam sure this film will instigate the ‘Love for the soil that fed us’ ‘ concluded Arokkiya das with  confidence.