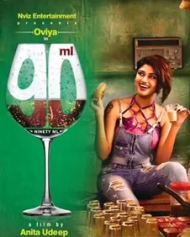 A | 2 hrs 9 mins | Comedy Drama
Release Date : 01 Mar 2019
Cast : Oviya Helen, Anson Paul
Director : Anita Udeep
Synopsis
90 ML is a Tamil comedy drama movie written and directed by Anita Udeep and produced by Udeep under the banner Nviz Entertainment. The movie cast includes Oviya, Masoom Shankar and Anson Paul in the lead roles. The movie songs background score composed by composed by Silambarasan (STR).
Story
90 ML revolves around how a few girls, who are bored with life, embrace a bold new lifestyle when they become friends with a feisty young lady. The rest of the film revolves around how their bond grows stronger when they begin sharing their most intimate secrets with each other.
Release
The first look poster of the movie was released in May 2018. The official trailer of the movie was...