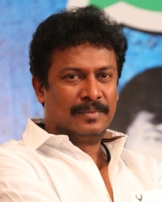 P. Samuthirakani is a Tamil film actor and director. He worked as an assistant to director K. Balachander. His 2009 directorial Naadodigal was a runaway hit, which was later remade in three languages. He has acted in several films as well and is best known for his performances in Subramaniapuram and in Easan, both directed by M. Sasikumar.

Samuthirakani entered cinema with dreams of making it as an actor. “People said I don't have the looks or the physique for it. I was unfazed. ‘Insults are a part of life,' I told myself and persevered. So when did he finally get a chance to don the greasepaint? “Pandiarajan's Padikkira Vayasu in which I had just a line to say! And to squeeze myself into the scene I had to cringe and crawl before the assistant director!” Not a tinge of self-pity! “Why at all? Slights can't hold me back.”

And that's when he started writing out scenes and dialogues which he would enact within the confines of his room. Soon it led to the discovery that inside him was a capable storyteller.

Subramaniapuram showcased Samuthirakani as an actor with potential and Nadodigal helped him prove his mettle as a director. From maker of megas to director of films that began with Unnai Charan Adaindhain, Kani has always been busy, primarily because he's absolutely egoless. The lukewarm response to his debut film and the disaster of his second — Neranja Manasu with Vijayakanth as hero — didn't deter him.

He went back to television, joined his mentor K. Balachander's unit, worked as an assistant of Ameer for Paruthiveeran and kept himself as busy as ever. “I continued working till better things came my way.” And the best did happen — Sasikumar gave him that solid role in Subramaniapuram, followed up with another in Easan.

He won the National award for best supporting actor in 2016 for his acting in the movie Visaranai.