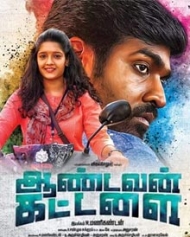 Aandavan Kattalai (aka) Andavan Kattalai is a Tamil film directed by Kaaka Muttai fame M. Manikandan. The film features Vijay Sethupathi and Ritika Singh in the lead roles. Produced by G. N. Anbu Chezhiyan and featuring music by K, the film began production in March 2016.
Plot
Vijay Sethupathi sets his foot in Chennai with a dream of landing a job in London. Accompanied by Yogi Babu, Vijay approaches a local travel agency in an attempt to get his passport and other necessary documents required to fly out of the country.
Rest of the film deals with what people do in order to land themselves a job in foreign countries, which is supposed to elevate their social status. It also narrates how people get conned with a generous dose of comedy.
Release
Aandavan Kattalai Official Teaser was out on 9 September 2016.  The Teaser had tremendous response from the audience and this created the movie hype to the sky.