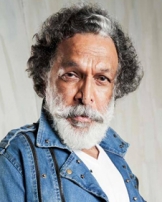 Nassar (also spelled Nasser, Naasar or Nazar) is Tamil actor, producer, writer, director, lyricist, and singer. He has appeared in Tamil, Telugu, Malayalam, Kannada, Hindi and English films. He is often cited as part of India's specialist character actors, along with the likes of Om Puri, Mammooty, Mohanlal, Nana Patekar and Kamal Hassan.

Nassar was born on March 5, 1958, in an interior village called Naththam, in Chengalpattu district, Tamilnadu. He sprung from humble beginnings and was an indifferent student making him bid goodbye to his P.U.C. studies, while he was half way through the course.

The pull of fine arts was something he could not resist. He escaped to Chennai, where he did his B.Sc in Botany at Madras Christian College.

With his experience as a drama writer and actor, he started seeking chances to act in films, but he was not successful. Hunger forced him to look for odd jobs and at one point, he joined the catering department of Taj Coromandel Hotel, Chennai. While he was trying for roles in cinema, he also wrote stories and poems and sent them to newspapers and magazines. Some of them were published.

Nassar joined the Film Institute in Chennai, in the year 1982-83, and received his diploma in acting. Prior to this, he also underwent training in acting at the Acting Training Centre, affiliated to South Indian Film Chamber, Chennai.

His efforts started bearing results when he was introduced as an actor in K. Balachander's film Kalyana Agathigal. His full name then was Nasser Muhammad. He entered the film industry in 1985. He has acted in about 300 films, which include Tamil, Telugu, Malayalam, Kannada, Hindi and English language films. He also became popular in TV serials.

The telefilm Kaattuppookkal, directed by Mahendran, and the other one titled "Panagaadu", directed by Senathibathi elevated his popularity as an actor. TV serials like Neela Mala, Chiththirappaavai, Vaana Veethi and Avalukkentru Oru Idam also earned him a good name.

The roles that brought him fame and critical appreciation were Maya Thevan in Thevar Magan (1992), a strict father in Em Magan (2006), a terrorist in Kuruthipunal (1995), and a devout Hindu father in Mani Rathnam's Bombay (1995).

His father Mehaboob Pasha still continued his old profession of polishing age-old jewellery at a shop in Chengalpet bus terminus area. Nassar has one sister and three brothers. Nassar fell in love with Kameela, while he was in search of an acting chance. They are married and have three sons. His eldest son studied at Lim Kok Wing University at Cyberjaya, Malaysia finishing his diploma in Games Designing.