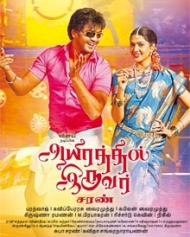 Aayirathil Iruvar is a tamil action romance movie directed by Saran, after Modhi Vilayadu again team up with Vinay Rai in this film. The film features Vinay in dual lead roles and three newcomers, Samuthrika, Swasthika and Kesha Khambhati, as the female leads. Dialogues written by Prabhakaran.
The film was said to be dealing with money laundering and hawala. The film was shot primarily in Thirunelveli while filming took also place in Hyderabad, Bangkok and Dubai.