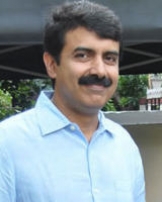 Rajiv was born in Kerala to the popular Tamil and malayalam film playback singer Kalyani Menon. He had the chance to travel across India at a very young age as his father, a naval officer, got transferred often. He later joined the film school to study cinematography. Menon did his schooling in Kendriya Vidyalaya on the IIT Madras campus.

Many ad films later, he started off as cinematographer for Mani Ratnam’s Bombay before directing Minsara Kanavu (Sapnay in Hindi) and Kandukondein…, apart from a few documentaries for Shyam Benegal and a short film for Girish Karnad. He was the cinematographer for a telugu movie Chaitanya, which was later dubbed in Tamil as "Madras to Goa".

Film career
His versatality as a cinematographer has received much praise, and throughout his career, he has worked with accomplished filmmakers like Mani Ratnam (Bombay, Guru), Shyam Benegal and Girish Karnad (Cheluvi). His latest contribution has been Mani Ratnam's Guru.

Menon’s first directorial venture Minsaara Kanavu was not only a popular hit but also fetched Prabhu Deva his first National Award for Choreography. Also, A R Rahman received National Award for Best Music& K.S Chitra won national award for the song "hoo lalala". His second directorial venture was the multi-starrer Kandukondain Kandukondain. In addition to directing the film, he also penned the story and screenplay. The song from this movie "Sandhana Thendril" won singer Shankar Mahadevan his first National Award.

He has also setup Rajiv Menon Productions and Mindscreen Film Institute, which supplies equipment for documentaries, advertising films and cinema. One of his recent ventures was Guru, an Indian film directed by Maniratnam. He has acted in a Malayalam film called 'Harikrishnans' and has appeared for a few seconds in his own movie "Minsara Kanavu".

His recent work includes a wonderful audio-visual delight about seven great carnatic musicians. This documentary was made for the event of releasing the coffee-table book "Voices Within" by the contemporary musicians T.M Krishna and Bombay Jayashree. The book brings out the personality of seven great Gurus of Carnatic Music with some very rare photographs presented in great print quality. The documentary by Rajiv Menon captures the qualities of these music stalwarts with his gifted inimitable style.

Advertising career
Falling in love with ad-making at a young age, Menon started his career in the field of ad-photography, and then went on to make a number of TV commercials. Rajiv Menon has been a well respected and notable personality in the Indian Advertising circuit. He entered the field during the early days (1980's) when competition was nill.It was the time when A R Rahman decided to do music on his own.

They become friends and his creativeness combined with A R Rahman's musical Jingles fetched attention from all spectrum towards them. A R Rahman did his first Jingle in a national wide ad with him(Allwyn Trendy Watches).So far, Rajiv has done many ads with A R Rahman's Jingles.Noteworthy ones are for Airtel,Colgate, Palmolive, Titan,Asian Paints, Raymonds.

Rajiv Menon's production house was ranked No.3 by Economic Times Mumbai in 2006. The next year's ranking saw the company move to No.2. Rajiv Menon's production house is setup in Chennai and his agency clients range from Ogilvy & Mather, Lintas, Rediffusion, Hindustan Thompson Associates, to even smaller ones like Rubecon and Situations Advertising.