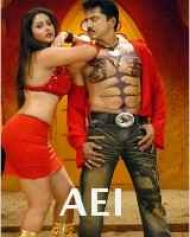 Sakthivel's past is made to unfold in a flashback. He is a military officer who joins his friend Mani (Kalabhavan Mani) on a vacation. The duo decides to reform the society and cleanse the police department by taking as hostage a few corrupt police officers.

They eventually run foul of a local goon Nachiyar (Kota Srinivasa Rao). The latter takes out Mani. Sakthi naturally vows to avenge his friend's death. The rest is all bloody climax in which Sakthi goes all out on a chopping spree.