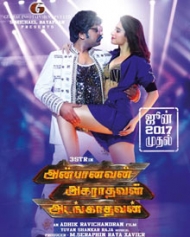 Anbanavan Asaradhavan Adangadhavan (aka) AAA is a Tamil action movie direction by Adhik Ravichandran. The movie features Simbu, Shriya Saran, Tamannaah Bhatia in the lead role.
Simbu will be playing a triple role in this movie and he will be pairing up with three different heroines.  The movie is being produced by Rebel Studios' Deepan Boopathy. GV Prakash Kumar has been approached to compose the music and he is likely to take up the film. The last-time that he composed a Simbu movie was "Kaalai" way back in 2008.
The project is budgeted at Rs. 30 Crores. Filming begins on May 1st the birthday of Ajith as Simbu is a huge fan of Thala and first look of the movie was released on the same day.
The them AAA decided that AAA will be released in 2 parts named AAA 1 Dimension and AAA 2 Dimension. The soundtrack of Anbanavan Asaradhavan Adangadhavan is composed by Yuvan Shankar Raja and the first part, AAA-1D is said to have five songs, in which One of the songs will be a TR remix song. A single Trend Song which had vocals and lyrics by STR himself was released as a New Year special on 30 December 2016.
The movie AAA 1 is scheduled for a release on 23 June 2017 to coincide with Eid.