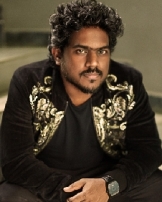 Yuvan Shankar Raja (AKA) Abdul Khaliq is a film composer and singer from the Tamil film industry. The youngest son of noted film composer Ilaiyaraaja, he began his musical career in 1996, at the age of 16, when he composed the film score for Aravindhan. He was referred to as Little Mastro, YSR, and BGM King.

There were rumours that Yuvan, who had been married twice, was going to marry a Muslim woman. Yuvan Shankar Raj also addressed the rumours on social media, stating that his family supports his decision and that there was no misunderstanding. He tweeted,

"I follow Islam, and I'm proud of it. Alhamdulillah."

"My family supports my decision, and there is no misunderstanding between me and my dad."

After this announcement, he got more negative responses to his Twitter handle, @Raja_Yuvan, and today he deactivated his account.

Later, he rechristened himself as Abdul Khaliq. On January 1, 2015, he married for the third time. Yuvan and his third wife had a baby girl on April 7, 2016.

Yuvan Shankar Raja graduated from St. Bede's School in Chennai. In 2005, he married his longtime girlfriend, Sujaya Chandran. Two years later, the couple filed for divorce through mutual consent, and in February 2008, they were finally granted a divorce. The reason for the separation has been cited as "irrevocable differences." He ended his friendship with Selvaraghavan over unspecified issues and left the film Aayirathil Oruvan.

Film Scores and Soundtracks
His first composition was the soundtrack for the Tamil movie Aravindhan. Subsequently, he broke into the Kollywood music scene with the album Thulluvadho Ilamai. Other soundtracks on which he has worked include Manmadhan, Kadhal Kondein, 7G Rainbow Colony, and Kanda Naal Mudhal.

His soundtracks for the films Silambattam, Aegan, Saroja, Yaaradi Nee Mohini, Billa, Satham Podathey, Manmadhan, and Vallavan established him as a leading composer. The soundtracks of films like Pudhupettai, which featured a traditional orchestral score played by the Chapraya Symphony Orchestra in Bangkok, or Katrathu Tamil, were critically acclaimed.

Yuvan Shankar Raja’s collaborations with the directors Selvaraghavan, Ameer Sultan, Silambarasan, Venkat Prabhu, Vasanth, and Vishnuvardhan have resulted in successful soundtracks. Upcoming features include Kettavan, Yogi, and Sarvam. He has been heralded as one of the top music composers in Chennai.

Besides scoring film music and soundtracks, he also produces personal music albums from time to time. In his very early years, in 1999, when he was not familiar to most people yet, he made the Tamil album The Blast, which contained 12 tracks and featured vocals by Kamal Haasan, Unnikrishnan, and Nithyashree.

However, the album went downright unnoticed. Currently, he is working on his second album, the rights to which have been acquired by Sony BMG but which have yet to be titled. It is reportedly a bilingual album to be released both in Tamil and Hindi. The launch is expected to happen in 2009.

In January 2009, Yuvan announced his first live performance at a show at the Rogers Centre in Toronto, Canada, to be held on April 25, 2009. According to Yuvan, the show titled Yuvan: Live in Concert will feature around 30 songs, which will be sung by singers like Hariharan, Shankar Mahadevan, Vijay Yesudas, Shreya Ghoshal, and his father, Ilaiyaraaja, as well as some stage dances in between by actresses Sana Khan and Meenakshi.