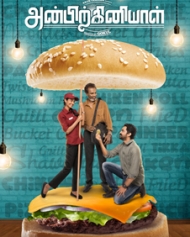 U | Drama
Release Date : 05 Mar 2021
Cast : Keerthi Pandian, Arun Pandiyan
Director : Gokul
Synopsis
Anbirkiniyal is a remake of the Malayalam movie Helen (2019), a Tamil version directed by Gokul and co-produced by Arun Pandian. The movie stars Arun's daughter Keerthi(Anbu) as a woman who accidentally gets locked in a freezer room. The soundtrack was composed by Javed Riaz. The movie was released on March 5th, 2021.
Anbirkiniyal (Keerthi) is a young, ambitious nursing graduate who is all set to migrate to Canada. She is raised by her loving father Sivam (Arun Pandian) after the demise of her mother. Anbu is doing a part-time job in a fast-food joint and is in a relationship with Praveen. After an unexpected incident, accidentally gets trapped inside a freezer at her workplace. What happens to Anbu forms the crux of the story.