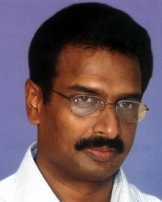 Arun Pandian is an Indian film actor, director, producer and politician. He began his career as an actor with the critically acclaimed film Oomai Vizhigal (1986). After retiring from acting, he took over the post as a chief producer for the London-based, Ayngaran International, a film production and distribution company.

He became a Member of the Legislative Assembly in 2011 after contesting in the Tamil Nadu legislative assembly election as a Desiya Murpokku Dravida Kazhagam candidate for the constituency of Peravurani. He is also termed as one of the politicians in Tamil Nadu, supporting Liberation Tigers of Tamil Eelam.

He is the son of retired Lt. Col. D.P. Chellaiah and resides in Chennai. He has three daughters named Kavitha Pandian, Kirana Pandian and Keerthi Pandian. He holds a degree of Bachelors in Economics from the Madras University.