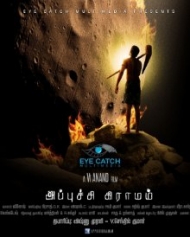 Appuchi Gramam is an tamil sci-fi movie direction debutant Anand V. Anand is an Civil Engineer who turned as director with this movie and he also worked under A R Murugadoss and Hosimin and Parathap Pothan.
The movie is produced by Vishnu Murali, he earlier produced the canda movie "The Gun and The Ring". The Movie has Kanja Karuppu, Singam Puli and with other leading stars.
Story
Appuchi Gramam is a science -fiction movie and it has everything to educate masses.  There is romance, action, rivalry in the village but one event changes it all.
There are families fighting between them, there is no development and there are casteism and romance too. When the Chief Minister said that the meteor will hit the villages and that they should vacate, all goes for a toss.